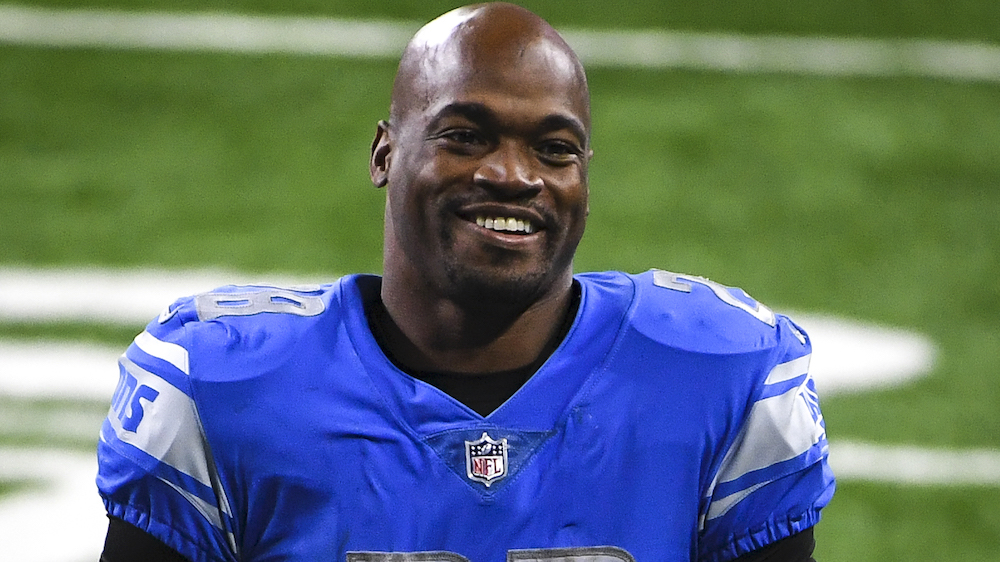 Nic Antaya/Getty Images After four years and multiple price cuts, the Detroit Lions running back Adrian Peterson finally walked away from his swanky estate in The Woodlands, TX.

Now another Texas home he owns has surfaced on the market. The future Hall of Famer is asking $5.3 million for a Houston abode.

Closing a deal in The Woodlands

The asking price slowly sank over the years. The final sale price wasn’t disclosed. It was last listed for $4.5 million before it sold in early December 2020, so Peterson was prepped to take a loss.

Accessed through a gated entry, the state’s circular drive features a tranquil fountain. The interior layout includes a chef’s kitchen, five fireplaces, as well as a two-story library and walk-in wine cellar.

All the bedrooms are large, and the master suite comes with dual closets. Laundry rooms are conveniently installed on both floors.

Other fun perks include a full bar with a game room and media room.

In the back of the house, a pool and spa are surrounded by two outdoor kitchens and a covered patio. Guest quarters with a separate entrance complete this luxe estate.

Hoping to sell in Houston

Peterson appeared to upgrade to a nearby home in Houston,Â which he purchased for $3,437,500 million in 2016, well below the $6 million asking price. That property is now available for $5.3 million.

The property was originally listed in February 2020 for $6 million, but the asking price was chopped twice before it was removed from the market.

The luxury compound then went back on the market in December 2020, at the current asking price. Located in the Rivercrest Estates in West Houston, this traditional estate on over 3.5 acres offers 11 bedrooms, 12 bathrooms, and 11,384 square feet of space.

The mansion was built in 2007, and its lavish details include soaring ceilings and an array of upscale amenities.

The compound is bound to appeal to a pro athlete or fitness fanatic, with its plush professional sports complex, which comes with a newly renovated indoor basketball court offering bleacher seating, gym, and hydrotherapy immersion tanks.

Outside, the grounds include a freshwater pool, golf putting green, and dog run.

A four-bedroom guesthouse completes the property.

If sold, the funds generated by the transactions may help the athlete with some financial problems. He reportedly owesÂ $8.3 million in defaulted loans, despite having earned over $100 million over his 14-season career.

Peterson began his NFL career with the Minnesota Vikings in 2007, where he starred for 10 seasons, before bouncing around the league over the past four seasons. He’s rushed for 14,820 yards and 118 touchdowns over the course of his career.

Kathryn Robinson with Compass RE Texas holds the listing for the Houston home.